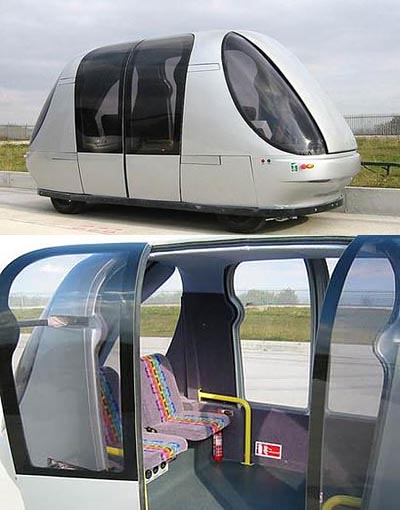 We all know that it would be much better for the environment if we all just walked or took public transit for all of our transportation needs, but it can be tough giving up your own car. Finding some sort of middle ground between personal transportation and public transit is the ULTra (Urban Light Transport) system, developed by Advanced Transport Systems of the UK.

Instead of a huge subway car, the ULTra is a personal-sized train, offering enough seating for up to four people, in addition to standing room for a couple more. The concept calls for on-demand personal transport, giving you non-stop transportation to your destination of choice. This is in stark contrast to mass transit solutions that make scheduled stops along the way.

The electric vehicles are driverless and run on a network of elevated or ground-level guided routes. It’s not the fastest thing in the world — topping out at 40km/h — but because it’s a nonstop service, it could prove to be fairly expedient. Payments are taken via smartcard and the average waiting time is said to be only 10 seconds! Service will begin at Heathrow Airport in London by fall 2008.