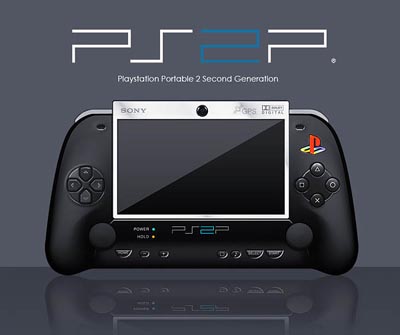 We all know that Sony is already working on a successor to the current PSP, but we’re left scratching our heads as to what they’re going to offer in the so-called PSP2. One designer has decided to go out on a limb and say that the PSP2 — or the PS2P, as he calls it — will have native support for full PS2 games. This isn’t an emulator!

In fact, the portable gaming system seems to have its own optical disc drive, reading full PS2 games just as the home version would. The control scheme remains much the same as the bigger PS2, getting a directional pad, two analog sticks, and the usual smattering of buttons. To make matters more interesting, he’s tossed in an OLED display, 2MP webcam, GPS, 16GB SSD, Sixaxis, and HDTV out.

Perhaps the biggest problem with this redesign, no pun intended, is its incredibly large size. The current PSP is already a fair bit bigger than the DS Lite, so you would think that Sony would want to go smaller and not Game Gear-esque bigger.