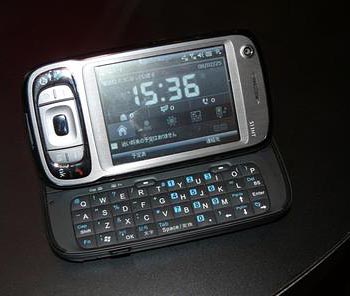 It can be terribly confusing for the consumer when fundamentally the same device gets a bunch of different names depending on where it is being sold. Canon has been doing this with their cameras for years, but no company is more prolific with the re-branding than HTC. Before they started selling phones under their own banner, HTC went around making devices for Dopod, i-mate, and Qtek, just to name a few companies.

Even now that HTC sells self-branded phones, they’re no stranger to renaming phones. The HTC TyTN II is currently being sold in the United States as the AT&T Tilt, but it’s gonna get bandied about in Japan as the EMONSTER. More specifically, the people at Emobile Japan have decided to nab the Windows Mobile 6 PocketPC phone and rebrand it as the HTC S11HT EMONSTER Smartphone. I kind of like the Emonster moniker better than Tilt myself.

To accompany the launch of this phone, Emobile is also providing a series of new service plans, including the “Mobile Phone Plan” that has no basic monthly fees. That’s got to be a typo, right?