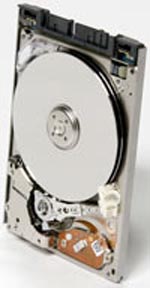 Although consumer electronics are getting smaller than ever, they still don’t offer the same level of performance as their larger counterparts. Laptops still have some catching up to do with their desktop counterparts, but Toshiba is helping to narrow the gap, especially for notebooks that are particularly compact.

Toshiba has developed a new series 1.8-inch hard drives that bumps the standard speed from 4200rpm to a more respectable 5400rpm. The latter speed is more typical of 2.5-inch drives and while it still isn’t as fast as their full 3.5-inch counterparts (7200rpm), it’s certainly a step in the right direction. These new 1.8-inch platters from Toshiba will be available in 80GB and 120GB capacities.

By improving the speed on these smaller drives, Toshiba is doing their part in improving the performance of the UMPCs and Macbook Airs of the world. They also note that these drives are more rugged and less power-hungry than some of their predecessors, making them perfect for portable electronics like the iPod classic too.