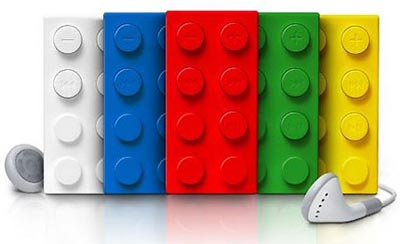 For anyone looking to revisit their childhood but with a little more musical flair, these Lego-inspired MP3 players just might do the trick. Sure, the functionality doesn’t extend much further than a Creative Zen Stone or an iPod Shuffle, but imagine the looks you’ll get from your friends when they see you rocking out a red Lego block.

There’s naturally no display to be had and from what I can gather, there’s no on-board storage either. Instead, users will need to supply a microSD card and the little bumps on the block serve as the main controls for adjusting the volume and so forth. The player is said to provide up to six hours of continuous playback.

Developed by Homade, the Lego-inspired MP3 players can also be accompanied by the firm’s Lego-inspired iPod dock. The dock has a similar brick-connecting appearance. No word on price.