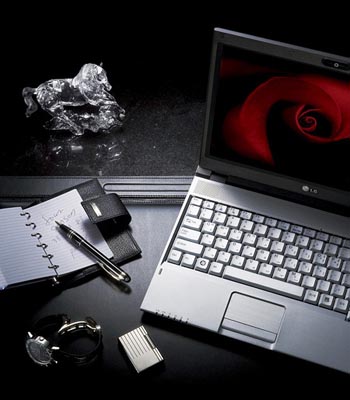 It may not be quite as portable as the Asus Eee PC, but the newly revealed R300 laptop computer from LG is easily much more powerful, thanks to the Penryn chipset housed within. In terms of specs, the LG R300 comes with a 2.4 GHz Core 2 Duo processor, up to 3GB of RAM, and a dedicated NVIDIA GeForce graphics card.

Clearly, LG is not attacking the lower end of the market with this particular laptop, because these specs make the R300 perfectly capable of running all sorts of higher-end multimedia applications and PC games. The 45nm Penryn technology from Intel is a definite plus.

Rounding out the specs are a 13.3-inch widescreen display, 802.11n WiFi, Bluetooth, and a 1.3 megapixel camera. The initial offering will be in Germany for about $2,350. A North American launch of the LG R300 may come shortly afterward with a reduced price point of $1,599.