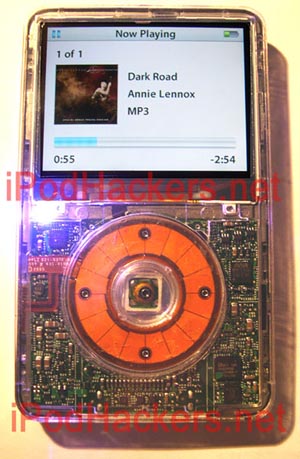 Although the iPod has been absolutely dominating the MP3 market for several years now, there is at least one feature that has been notably missing from the glossy Cupertino-powered device. If you’ve been wanting to cut the wires on your music player, this is definitely the iPod for you, because it comes equipped with fully functional Bluetooth A2DP. That’s stereo, folks.

The bad news is that this functionality is not coming directly from Steve Jobs. Instead, Ed Hernandez had to hack and slash his way through a iPod Video 5G, modifying it in such a way as to provide wireless connectivity. The Bluetooth module was a little too beefy to fit in the OEM housing, so there was actually a little more to this mod.

In addition to the $50 Bluetooth module, Ed invested in a $30 clear faceplate (so the blue LED could shine through), a $35 Flash adapter, and a $30-$120 CompactFlash card. The hard drive had to be replaced with CF in order to make room for the BT module. Sounds neat, but Apple needs to seriously include some stereo Bluetooth in the next iPod… or iPhone.