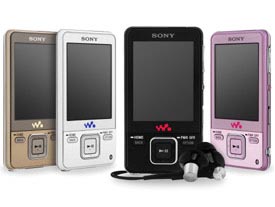 We all know that the Apple iPod absolutely dominates the portable MP3 player market, but that doesn’t stop the other big boys in the yard from making some rather valiant efforts. The newly revealed Sony Walkman NWZ-A820 Series comes equipped with quite a few features that you will not find on the iPod classic or iPod nano.

For starters, the display on this new player measures a large 2.4-inches across the diagonal. It’s only a QVGA resolution, but the high quality 30fps video playback is said to be quite crisp and clear. Along with the big display comes Bluetooth connectivity for wireless music enjoyment. There’s no need to have a wire dangling down your neck when you can take advantage of some great A2DP action.

Even with the Bluetooth on, Sony claims that the NWZ-A820 series will play up to 7 hours of video or 15 hours of music on a single charge. These numbers get bumped to 10 and 36 hours, respectively, if you turn the Bluetooth off.