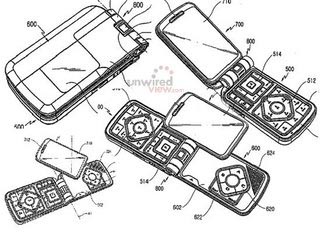 Nokia is trying to attact our attention with the rebirth of the N-Gage moniker, but Samsung isn’t going to sit idly by as the Finnish phonemaker goes around selling mobile games to everyone. Samsung has apparently filed a patent for what could easily be the most complex gaming cell phone ever, because it actually has several components that can be removed and added according to the user’s needs at the time.

Just looking at the concept sketches has my head spinning just a little. From what we can tell, the clamshell phone looks reasonably normal when it is in phone mode, boasting a color display on top and a keypad underneath, but this display can apparently be removed and placed in the center for gaming purposes. This reveals a second set of keys that will flank the screen on the other side. It’s almost like it’s straight out of Transformers.

The only question that remains is whether this Samsung transforming gaming-centric mobile phone will align itself with the Autobots or the Decepticons. Based on my experience with the Michael Bay movie, it seems that the default setting is for the latter.