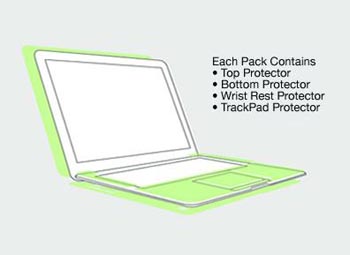 We already know that the MacBook Air can fit inside of a manila envelope, but I’d imagine that it could suffer from some serious damage if you decided to actually ship it across the country (or across the ocean) using just that envelope. At the same time, you don’t want to hide the beauty of the skinny laptop behind some other company’s logo, right?

For people who want to keep their MacBook Air notebooks protected while still maintaining that Apple chic throughout the process, NLU Products has the BodyGuardz clear film cover. You’ve probably seen similar products developed by companies like 3M, wherein they place a clear film over the front bumper of a car, protecting it against rock chips and other nasty things. From a distance, it looks like there is no cover at all and that’s it’s main appeal.

With the MacBook Air version, you get four pieces of clear protective skin: for the top, bottom, wrist rest, and trackpad. The adhesive used is water-based so it won’t do your Apple notebook any harm. This form of protection isn’t exactly cheap — $49.95 — but then again, neither is an SSD-equipped MacBook Air.