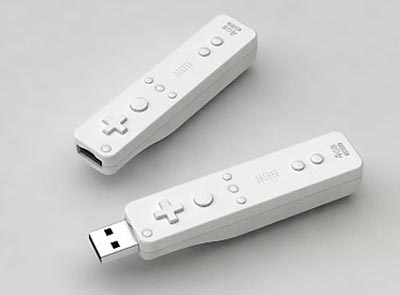 It might be as cool as the Chintendo Vii, but this is pretty nifty too. While the device might look like a mild-mannered Wii Remote, it really has no motion sensitivity at all. Instead, this is little more than a cleverly disguised USB flash drive.

The picture might be a little deceiving, because this flash drive is nowhere near as large as its real Wii Remote counterpart. Instead, it’s pretty much the same size as some larger thumb drives. With the USB connected retracted, it looks almost like one of those fake toys you buy at the dollar store. You know, the faux cell phones and BlackBerry devices that they have for the young ones?

To gain access to the USB connector, simply tap the “A” button and it comes flying out where the infrared sensor would be. The spring-loaded mechanism appears to be very strong and possibly a little dangerous for children. To retract, hold the A button and push the connector back in. The “home” button serves as the activity light.

The Wiimote-shaped drive is available in capacities ranging from 1GB to 8GB. Check out the Wedisk at Solarmemo.com.