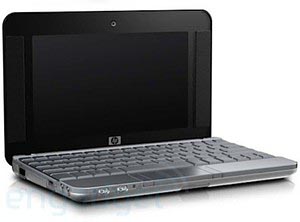 The rumors are true, it seems. HP is attacking the sub-notebook market currently dominated by the Asus Eee PC, releasing a device they call the HP 2133. Interestingly, HP has not opted for an Intel processor for this tiny computer, going instead with the people at Via. This follows in the footsteps of other Eee PC wannabes, because the Via CPU is considerably cheaper than its Intel counterpart.

Confirmed details are pretty slim at this point, but we do have a few tidbits of information that might pique your interest in the meantime. The QWERTY keyboard, for example, extends all the way to the edge of the unit, ensuring that it gets as close to being a full-sized keyboard as possible. The screen is bigger than the Eee’s 7-incher, we hear, because the HP 2133 comes with a 8.9-inch widescreen (1366×768). There’s also a one-inch bezel all the way around.

We can’t say for sure, but the current word has the HP 2133 UMPC priced in the $600 range, making it a good chunk more expensive than the Asus Eee PC. For $600, consumers may be more inclined to buy a full notebook than an in-between unit like the HP 2133. To better serve as a “lifestyle companion device”, HP might need to cut some costs (and some corners).