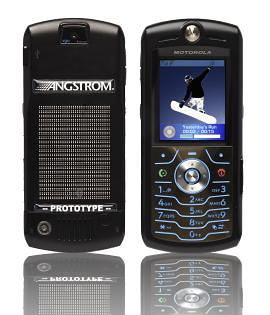 Many companies are trying to go green by developing products that rely less on conventional sources of energy and rely more on renewable resources. Motorola has partnered up with Angstrom Power and the net result is a Motorola SLVR L7 cell phone that actually gets its power straight from the water tap.

Well, the connection isn’t quite as direct as that. It’s not like you can plug your phone into the kitchen sink and get all juiced up. Instead, the cell phone prototype is powered by hydrogen. The other half of the equation is a desktop fueling station that produces hydrogen from water, storing the particles in a metal hydride storage. The hydrogen molecules are then passed through a fuel cell membrane which strips the electrons to power the phone.

By relying on water as an energy source, this could prove to be one of the most environmentally friendly handsets on the planet today. The question that remains, however, is what powers the desktop fueling station?