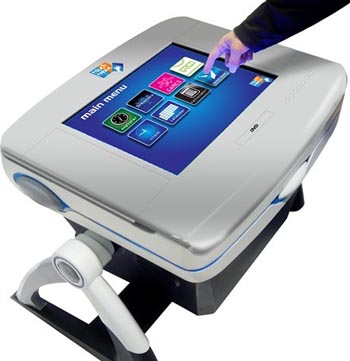 Ever since we heard about the Microsoft Surface Computing technology many moons ago, we drooled at the possibility of interacting with a touchscreen table. It just seemed pretty cool that you could sit down at a restaurant or a hotel lobby, tapping away at the table’s surface to book hotel rooms and show tickets. We’re still waiting for that to hit the market, though.

If you’re tired of waiting for the Microsoft Surface, you might want to consider the new 21-inch Touch Table EES from ToyQuest. It’s not nearly as fancy as the Microsoft offering, but it’s about as close as you’re going to get any time soon. Instead of being geared toward commerce and entertainment, the Touch Table EES is an education system that features games, a DVD player, multiple inputs, and a Google Earth-styled globe. Unfortunately, there’s no Internet connectivity.

It’s hard to say whether the ToyQuest Touch Table EES is worth the $499 asking price, because as its company name implies, this is basically just a toy.