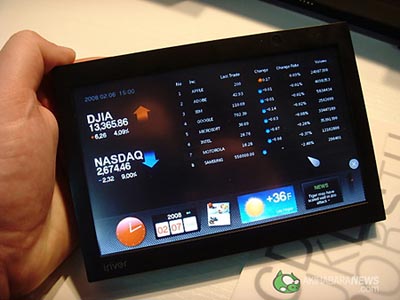 iRiver wants to invade just about every aspect of your digital lifestyle, because the iRiver Unit2 is an all-inclusive multimedia station for your home. There are several components to this system, but the idea is that it can deliver all the multimedia you need for hours, days, even weeks of entertainment.

First up is the a touchscreen-equipped Portable Media Player (PMP). This looks pretty much like every other touchscreen PMP from iRiver, except the user interface has been described as a little more Apple-esque. It is through this device that you will be controlling much of the other functionality. Other items as part of the Unit2 multimedia station are a dock, a VoIP phone, and Wi-Fi connectivity.

You’ll also notice that the dock is perfectly capable of accepting optical discs, so you can presumably play CDs and DVDs through the PMP. I could be wrong, but if the connection between the dock and PMP is wireless, you can effectively have a handheld DVD player too. Nifty.