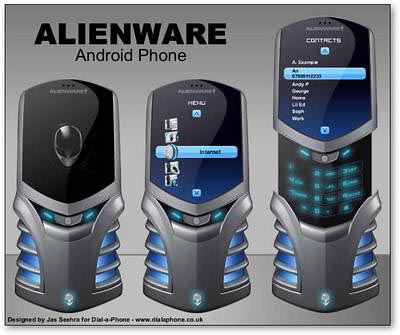 We already know that Google and Dell are probably working on something together, even though neither firm is willing to confirm or deny any of the rumors. As such, we’re expecting that there will be some sort of Android-powered cell phone arriving in the Dell coffers at some point in the future, leading amateur designers to dream up what such a creation would look like.

Seeing how Dell owns Alienware, it might make more sense to approach the smartphone market with an Alienware-branded handset powered, of course, by the Google Android platform. This is strictly a fanboy mockup so there’s no saying how close it resembles the final product. Many of the styling cues come from the Alienware stable, resulting an extraterrestrial look and glowing keys.

I actually kind of dig this Alienware Android Phone for its futuristic appearance, but it’s unlikely that I’d ever buy something that looks this clunky.