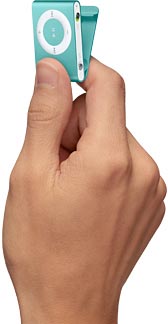 Although the iPod Shuffle is easily one of the smallest and most convenient MP3 players on the market, I still can’t get over the fact that it lacks a display and any sort of real control over which song comes pumping through your eardrums. Even so, it’s so affordable that you might want it for the sole purpose of going to the gym or for a jog around the block.

If the $79 asking price for the 1GB iPod Shuffle has been holding you back, you may want to take a second look at the Apple Store today, because the price has been dropped to $49. This represents a solid $30 savings over yesterday’s price tag and it appears that this price cut is permanent.

Alternatively, you can wait until a little later this month to get your hands on the 2GB Apple iPod Shuffle. We hear that they’ll be selling that for $69, which so happens to be $10 cheaper than old 1GB price point. Clip away? Should the Zen Stone Plus be worried?