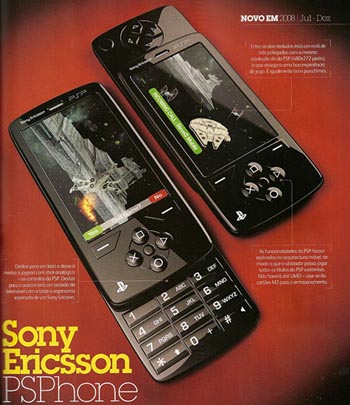 Most of us have realized that a Sony Ericsson PSPhone is not a possibility, but rather an inevitability. It’ll only be a matter of time before Sony unleashes a proper gaming phone to accompany their existing lineup of music phones (Walkman), camera phones (Cyber-shot), and TV phones (Bravia). They like this cross-branding thing, you see.

Displayed here is a mockup of what the Sony Ericsson PSPhone could look like and this has to be one of the cleverest designs we’ve seen to date. The handset takes on a glossy slider form factor, but like the Nokia N95, it’s actually a dual slider. When opened the conventional way, you gain access to a regular numeric keypad. Slide it the other way, and you get the d-pad and analog stick. The face navigation buttons then translate to the familiar set of circle, X, square, and triangle.

With this design, gamers gain access to a beautiful widescreen display, accompanied by familiar controls. Phone users also don’t have to put up with anything too out of the ordinary, effectively producing the near perfect marriage of mobile gaming and cellular telephony. It might not be an iPhone killer, but it’ll certainly compete well against the Nokia N-Gage platform.