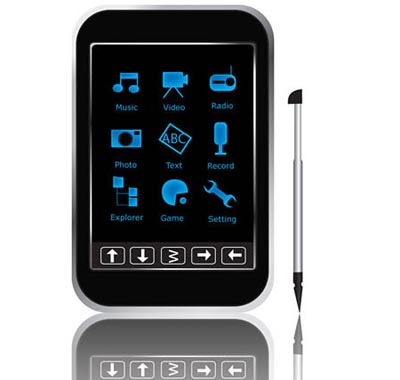 There’s something to be said about touchscreen displays, but I personally think that if a multimedia player is going to boast that kind of functionality, the necessity of a stylus pretty much ruins the experience. Think about when you’d want to use it at the gym or while on a jog. Two-handed control can get pretty cumbersome.

The Sumvision Ice is a portable multimedia player that comes equipped with a 2.8-inch touchscreen display, eschewing any sort of standard buttons altogether. This sounds a lot like the iPod touch, but the Sumvision Ice comes in at a much lower price point and it comes bundled with a stylus. This leads me to believe that finger-based input probably doesn’t work all that well.

Other features include 4 gigabytes of internal memory, microSD expansion, FM radio, MP3 and video playback, voice and FM recording, e-book reader, picture viewer, built-in games, and a li-polymer rechargeable battery. The asking price on the Sumvision Ice is about $118.