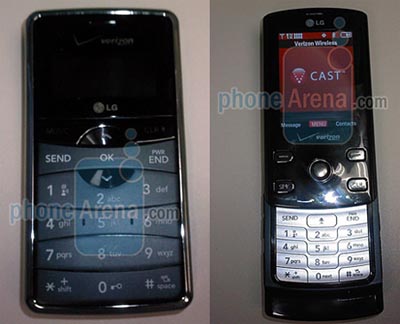 We just caught wind that Verizon Wireless has a couple of new LG handsets coming down the chute and the pair seem to be approaching the same market as the existing LG enV messaging phone and LG Chocolate slider phone. Technically, these handsets are exactly “replacements” for their predecessors, but they’re pretty similar.

On the left is the LG VX9100. The form factor is nearly identical to the VX9900 enV, but the front face has been dressed up considerably. They’ve also replaced the five-way navigator with just a simple up-and-down interface. Significantly slimmer than the enV, the VX9100 also gets a full QWERTY keyboard on the inside, stereo speakers, a 2MP camera, microSD expansion, and the microUSB port.

Approaching a similar market as the LG Chocolate and LG Venus is the VX8610, a stylish slider phone with an extra bonus on the back. If you flip the phone over, you’ll discover that it comes with its own Bluetooth headset, conveniently docking into the phone when not in use. Other features include four standard buttons (instead of touch sensitive controls) on the front face, a QVGA display, 2MP camera, and microSD expansion.