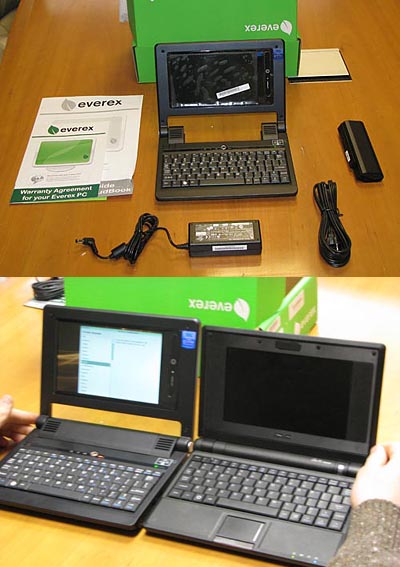 Seeing how the Asus Eee PC took the subnotebook world by storm, Everex thought that they could capitalize on this enthusiasm with the release of the CloudBook. After all, the features on the seven-inch mini-laptop are pretty similar to the Asus counterpart. Unfortunately, it turns out that the Everex CloudBook is filled with all sorts of “significant problems” and early reviews point toward a rather major disappointment.

Instead of a regular mouse touchpad located beneath the QWERTY keyboard, Everex has opted for a “tiny stretch of plastic in the most awkward place you can possibly imagine.” The itsy-bitsy touchpad is located to the upper-right of the keyboard, just about the Del and Ins keys. But the form factor and design aren’t the only things going wrong.

It turns out that Everex CloudBook has software issues too. When Laptop Mag tried booting it up, they couldn’t get past the screen where you select your timezone, “because there didn’t seem to be a Next or OK button to help you select your timezone.” As it turns out, the Next button was hidden underneath and they had to move the window to find it. This is dumb, because the setup program was bigger than the 400 pixel height of the display. This problem affects press samples, but consumer units should be fine, according to Everex’s Paul Kim.

Check the rest of the mini review for more in-depth impressions.