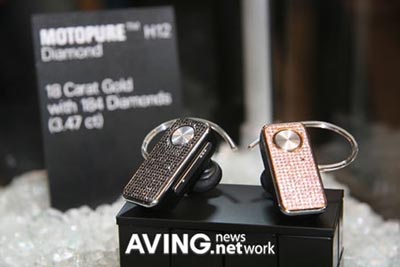 It sounds like an outlandish proposition, but when the special version of the Motorola Motopure H12 Bluetooth headset sells for as much as $17,000, you really are faced with that kind of decision. For that same price, you have pick of the litter when it comes to a variety of smaller cars like the Toyota Corolla or Honda Fit. Alternatively, you can have some eye candy for your ear.

On display at the Mobile World Congress in Barcelona, the diamond-encrusted versions of the Motopure H12 headset come in two variations. The one that is pictured on the right is the most extravagant of the two, selling for the aforementioned 17 grand. For those on a budget, Motorola also has a much more affordable version with fewer diamonds, selling for a paltry $7800.

Let’s say that you can afford this level of luxury. If so, you’d better get yourself a security force too, because I’d imagine that thieves would have no problem plucking those shiny rocks from your ear.