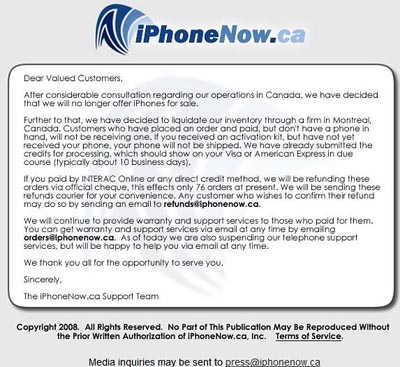 Because Apple has no official agreement with any Canadian provider, us poor Canucks are forced to resort to other means in order to get our hands on an Apple iPhone that will work north of the 49th parallel. Many folks just wander across the border, buy a handset from the Apple store, and then come back and unlock it themselves, but the average Joe cannot be bothered.

To address the rising demand for unlocked iPhones in Canada, iPhoneNow was launched. Unfortunately, it turned out to be one of the biggest scams this country has ever seen. Never mind that iPhoneNow was charging an insane premium (via an extended payment plan) for the Apple iPhone, because several customers never got an iPhone at all. One woman is out $3000 and she’s still iPhone-less.

After all of this negative press, iPhoneNow has apparently shut down for good. Its website now states that sales have been suspended and anyone who has not received a handset will get a full refund. I say good riddance. Just remember the old saying for next time: buyer beware.