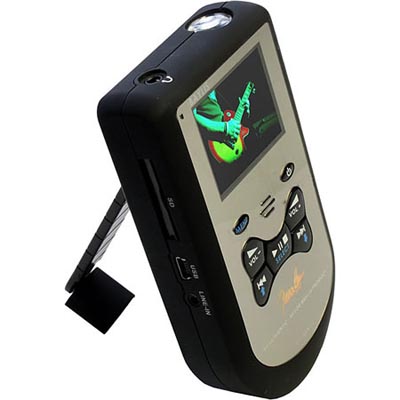 While the whole “pod” thing might draw some comparisons to a certain music player from Apple, this particular device is something different altogether. That’s not a kickstand that you see on the back of the Eco-Pod; it’s actually a handcrank that you use to juice up the battery.

There appears to be a heavy push toward alternative energy sources these days, but most make use of solar panels, biofuels, and other means that don’t require too much effort on your part. Remember when the XO laptop from the OLPC people first got revealed? They were talking about handcranks and drawstrings, but they ultimately discarded those ideas because people don’t want to be physically involved in powering their machines.

Although the hand crank on the Eco-Pod sounds like a decent idea under emergency situations or for, I don’t know, camping or something, I imagine that it’d be a pain for everyday use. Even so, inventor Trevor Baylis says one minute of cranking produces enough juice for 40 minutes of music.

The Eco Media Player, as it is officially known, retails for 140 GBP.