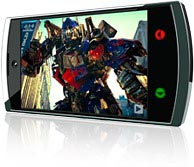 Let’s face it. As much fun as cell phone games can be, the graphical prowess of most mobile phones is pretty freaking anemic. You’re left with heavily pixelated and lowly-detailed images, forcing you to whip the DS Lite or PSP for yet another mobile gaming session. Nokia’s new N-Gage engine might be working to rectify that, but I doubt that they’ll be able to generate the same level of graphics as the upcoming NVIDIA APX 2500 processing platform.

NVIDIA has already established itself as a (Ge) force in graphics technology for computers, so all that they’ve done is shrunk that philosophy down to the scale of a regular cell phone. Yes folks, the APX 2500 is essentially an NVIDIA GeForce graphics chip for your mobile.

The chipset is able to handle movies as high as 720p and photos as resolution-filled as 12 megapixels. Designed with minimal power consumption in mind, the NVIDIA APX 2500 sounds pretty exciting. More info at the official site.