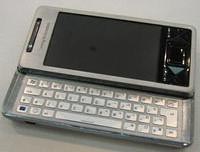 I thought it looked familiar. There’s a reason why the newly revealed Sony XPERIA X1 looks so much like something that HTC would build. It’s because HTC built it. Wow, that makes sense!

As you know, Sony has pretty limited experience in the world of Windows Mobile, let alone the world of sliding QWERTY keyboards and the like. Making the XPERIA X1 is quite a different adventure than the VAIO UX1 UMPC, after all. The device will clearly boast Sony Ericsson branding, much like the countless Dopod, i-mate, and Qtek-branded items that have come out of the HTC factory in the past.

This might make me want the Sony XPERIA X1 even more, especially since the Windows Mobile base has been overlaid with a beautiful “skin”, not unlike the TouchFLO interface developed for the HTC Touch.