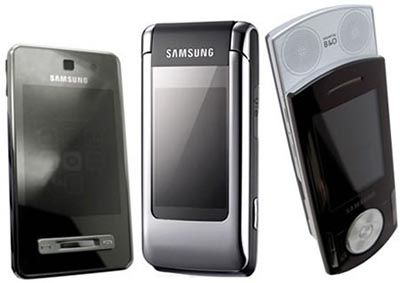 Samsung has three incredibly hot phones on display at Mobile World Congress in Barcelona, each offering something special for the discerning consumer. There’s even one with dual touchscreen displays. Can you guess which one?

Off to the left is the Samsung F480, which is basically their old Armani phone but without the Armani branding. This will hopefully bring the price point on the iPhone-like handset down to a more reasonable level. Critical specs include the 2.8-inch QVGA touchscreen, Croix OS with tactile feedback, 3G connectivity, FM radio, and a 5 megapixel camera. This should ship in April or May for about $550.

In the center is perhaps the most exciting of the bunch. The Samsung Dual Touch Chic G400 is a flip phone wherein both the external and internal displays happen to be touchscreens. I can’t say for sure, but this certainly sounds like an industry first. Other goodies include an all-metal shell, 5 megapixel camera, FM radio, 100MB memory, and microSD expansion. The touchtastic goodness will sell for about $435 when it ships in May.

Last but not least is the Samsung F400 B&O slider. Like the Nokia N95, this is a two-way slider. Open it the conventional way and you get a keypad, but slide it the other way and you don’t get multimedia controls. Instead, a pair of Bang and Olufsen stereo speakers are revealed for your music-sharing pleasure. This 3G phone also boasts RDS-enabled FM radio and microSD expansion. Look for it in late March for about $550.