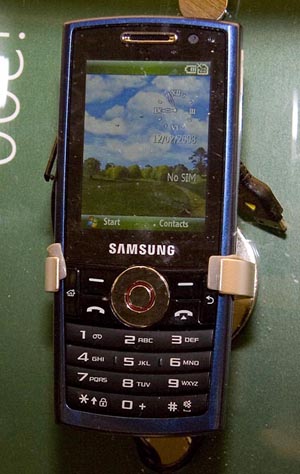 Who needs the flash of a BlackBerry or an eye-catching HTC, when you can get in on some subdued smartphone action via the recently revealed Samsung SGH-i200. As its model number implies, this appears to be a lower-end handset, but they’ve managed to shoehorn the goodness known as Windows Mobile 6 in there. In fact, there’s word that the i200 is rocking a new version of WM6.

There’s no QWERTY here, so email and SMS enthusiasts may be a little disappointed. Instead, the Samsung SGH-i200 has a conventional numeric keypad to go with its conventional candybar form factor. Other features include tri-band GSM/EDGE (900/1800/1900) and high-speed UMTS/HSDPA on the 2100 MHz band, QVGA display, 2 megapixel camera, and Bluetooth 2.0.

It’s not jaw-dropping by any stretch of the imagination, but the Samsung SGH-i200 could be a good solution for someone looking for a simple WinMo smartphone. No word on pricing, but it should launch sometime in the first half of this year.