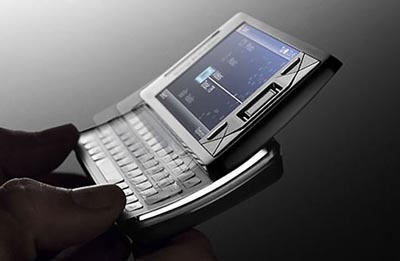 For me, there are two very noteworthy reasons why we should pay attention to the newly announced Sony XPERIA X1 touchscreen smartphone. First, considering that Sony usually powers its smartphones with Symbian, it’s pretty exciting to hear that they’re doing Windows Mobile too. Secondly, the sliding display curves up slightly, almost like the HTC TyTN II (aka AT&T Tilt).

The Windows Mobile-powered Sony XPERIA X1 looks like quite the formidable smartphone and it’s certainly a lot more stylish than some of the more corporate-oriented devices on the market. The display is a large 3-inch touchscreen, and it comes backed with a 3.2 megapixel camera, full QWERTY keyboard, 400MB of internal memory, microSD expansion, and WiFi.

I’m usually a pretty big fan of HTC products, but I’m inclined to think that the Sony XPERIA X1 could be superior to the Tilt. Peep the (short) vid for a closer look.