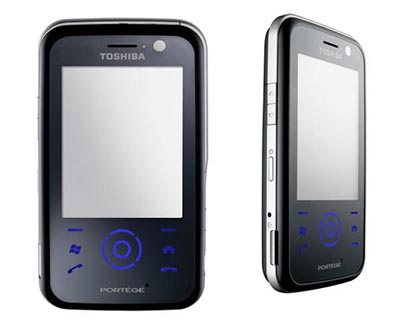 Instead, you could say that the Toshiba G810 bears more of a resemblance to the HTC Touch. It’s got a similar set of touch-sensitive controls beneath its touchscreen display, and like the HTC Touch, this thing comes powered by Windows Mobile 6 too. I think the biggest and most immediate difference you’ll find between the two handsets is that the HTC is more curvaceous than the Toshiba, though I’m totally digging the blue-lit controls.

In addition to that huge 2.8-inch touchscreen display, the Toshiba G810 also comes loaded with high-speed HSDPA connectivity, a formidable 3 megapixel camera with autofocus (beating the HTC Touch, by the way), WiFi, Bluetooth, FM radio, 256tMB internal memory, and integrated GPS. This is quite a nice set of features and the only thing missing, if it’s the kind of thing you need, is a physical QWERTY keyboard. Like the Touch and iPhone, you’re stuck with the on-screen virtual QWERTY.

We’re not completely sure on how much this thing will cost, but we hear that the Toshiba G810 smartphone will launch in Europe sometime in late Spring.