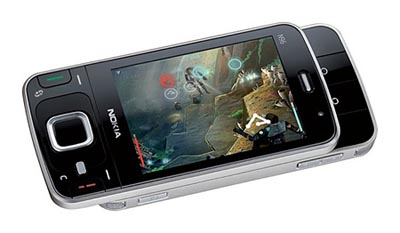 Rumors have been swirling around on the Internet some time now about the Nokia N96, because it was supposed to meld the brawn of the N95 with the gaming goodness of the N81. As far as we can tell, this glossy black wonder totally delivers on all fronts.

It really isn’t much of a stretch to say that the Nokia N96 super smartphone marries the best of both worlds for the N81 and N95. On the one hand it has stuff like Symbian 60 and a 5MP camera like the N95, but it has more of the appearance of the N81, along with the N-Gage gaming platform. But the N96 brings more to the table too.

There’s 16GB of internal memory in this puppy, which is double what the N95 8GB offers. What’s more, the display is a glorious 2.8-incher, they’ve tossed in DVB-H for digital TV, a kickstand for desktop viewing, and funky backlit touch buttons that morph to suit the current needs. Music brings up the usual rewind and fast forward, whereas N-Gage brings up gaming controls.

Expect the Nokia N96 to launch with an asking price of about $800, but it probably won’t have support for US 3G.