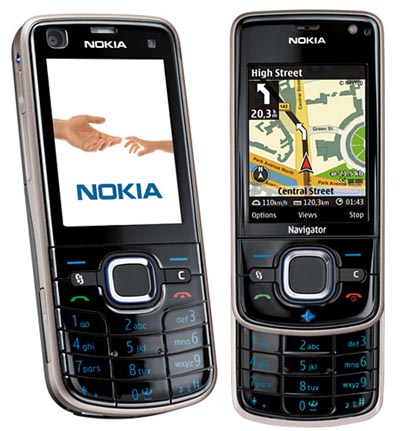 Now that the Mobile World Congress is underway in Barcelona, the cell phone announcements are coming fast and furious. Nokia already unleashed a couple of N-series smartphones, but they’ve hit up the 6000 series as well, offering a candybar and a slider for the mid-range consumers.

On the left is the Nokia 6220 Classic. As you can tell, it adopts that glossy piano black finish that seems to be all the rage with the Finnish phonemaker these days. In terms of features, the Nokia 6220 comes with quad-band GSM, dual-band HSDPA (900/2100), 2.2-inch QVGA display, 120MB internal memory, microSDHC expansion, Bluetooth 2.0+EDR (including A2DP), 5 megapixel camera, and aGPS. Look for it in Q3 for about $475.

On the right is the Nokia 6210 Navigator, a device that has been designed to replace the 6110 Navigator released last year. As its name implies, the flagship feature is the integrated AGPS with Maps 2.0 and built-in geotagging. Other features include quad-band GSM, dual-band HSDPA, Bluetooth, 3.2 megapixel cam, secondardy VGA cam, 120MB internal memory, and microSDHC expansion. This slider will go for $440.