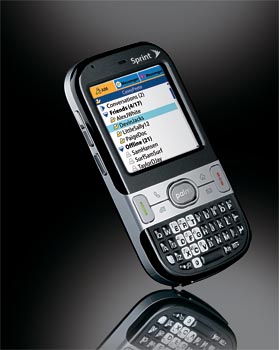 As you may have noticed, companies that once only targeted their smartphones at the corporate market are starting to develop handsets that are a little more consumer friendly. RIM developed the BlackBerry Pearl, for example, whereas the guys at Palm made the Centro. Unfortunately, the people have been left out in the cold when it came to latter. That’s changing.

If you happen to be cruising through the UK any time soon, you will soon have the opportunity to rock out with a Palm Centro smartphone. They haven’t announced which colors would be shipping to England and the rest of Europe, but there’s a good chance that they’ll start with black, introducing the other colorful variants after the black Centro picks up some steam.

The features for the Euro-bound Palm Centro are probably the same as the one being bandied around in the United States, meaning you still get a 320×320 touchscreen display, full QWERTY keyboard, 1.3 megapixel camera, and Palm OS Garnet v5.4.9. The asking price has been set at 199 GBP and 299 Euro, depending where you buy it.