There’s no denying that the BlackBerry line of devices from Research in Motion is incredibly popular among the business and corporate crowd, but they’re also trying to keep up with the latest and greatest that technology has to offer. At the same time, they want to better penetrate the consumer market, because that’s a segment that has largely gone untapped by RIM.

At least two patents have been filed by the makers of the BlackBerry, and both of these patents point toward very interesting developments that we weren’t expecting from Research in Motion. The first calls for a BlackBerry with a slide-out QWERTY (or SureType) keyboard. This will help to reduce the footprint, but what makes the patent particularly interesting is that it is an “angled” slider, not unlike the AT&T Tilt. The difference is that it’s a vertical slider, rather than a horizontal one.

Then, you must be wondering, how would you about operating the BlackBerry in its closed position. Well, that’s where the second patent comes into play, because RIM is working on some rather innovative multi-touch technology for a BlackBerry touchscreen. It seems that this tech is even more advanced than the one on the iPhone, because not only is it multi-touch, it’s also multi-pressure. By being able to detect different levels of pressure, a series of 3D touch interfaces are possible. Press a little to zoom a little, press a lot to zoom a lot. 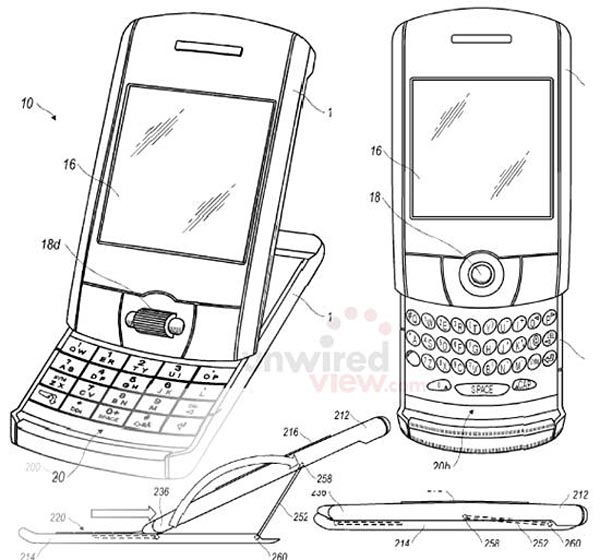