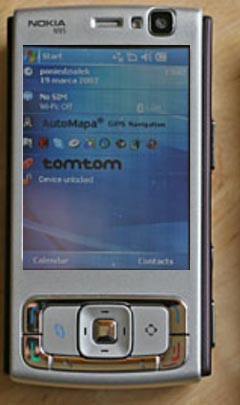 In Microsoft gets their way, we could be looking at a Windows Mobile-powered version of a Nokia N-Series smartphone some time soon. The software giant already has huge contracts with companies like HTC and Motorola, but they’d love to snatch up a huge partner like Nokia, which so happens to be the world’s largest phonemaker.

Microsoft has already manage to coax Samsung — which mostly sticks with Symbian — to come over to the WinMo side. This is demonstrated in the T-Mobile Shadow. A similar argument can be made about Palm Treo devices, which are available in both Palm OS and Windows Mobile flavors. Motorola’s talks with Nokia are in their preliminary stages, and I imagine that if they were to come to an agreement, Nokia would still support Symbian. They’d just to do WinMo too.

The team in Redmond, Washington is fully aware of Nokia’s ties with Symbian, but they “would love to see the day where those synergies would extend completely with Windows Mobile.” In all likelihood, a Windows-powered Nokia won’t hit the market until the release of WinMo 7 or 8.