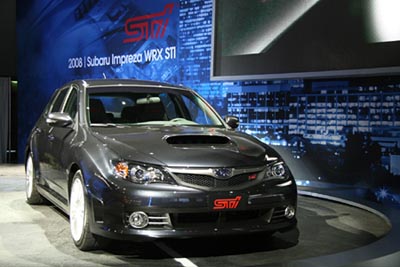 I’ve been thinking about buying a Subaru myself. The AWD drivetrain is absolutely legendary and when you toss in the WRC heritage, you know you’ve yourself a winner. People looking for more power than what the pedestrian Impreza has to offer, Subaru has the WRX and STi versions. Unfortunately, there’s a $10K difference between the WRX and STi.

As such, Nick Senior of Subaru Australia is hinting that the car company is working on a model of the Impreza that will fit between these two high-end offerings. As it stands, the 224hp WRX sells for about $24,000 in the States, whereas the 305hp WRX STi sells for just shy of $35,000. The “STi Junior”, as it’s been dubbed, will slot in the middle both in terms of price and horsepower, arriving at around $30k for about 265 horses.

A mid-level WRX shouldn’t be expected any time soon, however, because Subaru is still working closely with Toyota on a next-generation (AWD?) Celica… or Celica equivalent. Even so, the prospects of at least a few special edition Subaru Imprezas sound positively delectable.