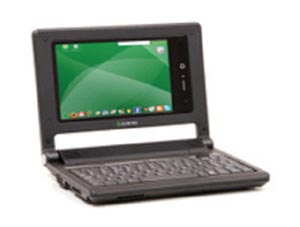 You may have heard about the plans from Asus to extend their Eee line beyond the 7-inch Eee PC. Everex is reportedly taking a page out of Asus’ book, because they’re extending their CloudBook line beyond their 7-inch wonder too.

Paul Kim is Director of Marketing at Everex and he says that the upcoming CloudBook is not going to be the only offering from the company to come powered by the funky gOS that we already see in the desktop variant available at Walmart. Paul says that they expect “equal success” against the Asus Eee PC, but they’re bringing a touchscreen variant in Q3 2008. By contrast, Asus hasn’t confirmed anything about a touchscreen.

But wait, there’s more. There’s something big a-brewing at Everex, because there’s talk of a 22-inch display for the Everex CloudBook. I imagine that this version would be equivalent to an iMac-like form factor rather than an actual portable computer. Wait. Isn’t Asus doing that too?