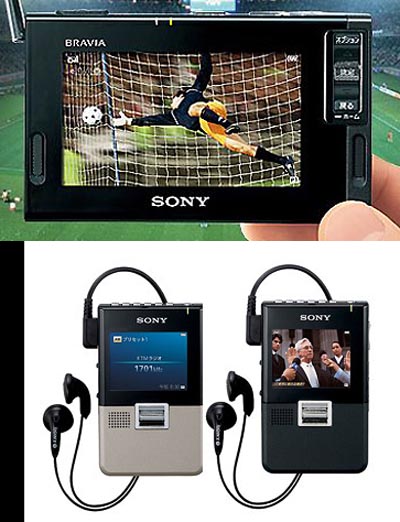 Brand recognition goes a long way. If Sony were to release a couple of portable video players that only carried the Sony name, very few people would take note. Toss in the Bravia nameplate and folks are suddenly a little more interested in what the mobile entertainment unit has to offer. At least, that’s what Sony is hoping.

What you see here are the Sony Bravia XDV-D500 (top) and the Bravia XDV-G200 (bottom), both of which are supposed to boast the high-end image quality that you’ve come to expect from their home theater counterparts. The larger XDV-D500 comes loaded with a 3-inch display, 500:1 contrast ratio, 1Seg TV tuner, 2GB internal memory, video recording, and up to eight hours of playback.

The smaller XDV-G200 has a similar feature set, but the display shrinks by an inch down to 2-inches and the little engine that could integrates an AM/FM tuner for good measure. No word on pricing, but I imagine that both of these are destined for the Japanese market only.