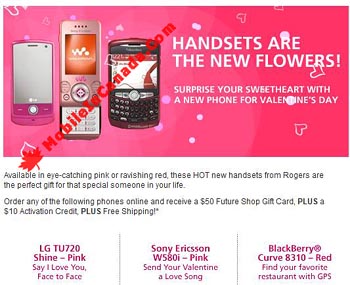 You didn’t think the barrage of pink and red phones was coming to a halt any time soon, did you? Rogers Wireless has just announced no fewer than three more cell phones that are clearly targeted at the more romantic among us. In fact, the supplied ad spot promoting the new phones proclaims that “handsets are the new flowers” and that your “sweetheart” will be “surprised” by your thoughtful gift.

Right. Because there’s nothing in the world that a girl wants more for Valentine’s Day than a three-year contractual agreement with a new mobile operator. What’s that? You’re going to buy these phones at full retail? I seriously doubt that, so unless you plan on picking up her voice and data plan for the next three years, you’d better be sure that she wants to lock down to a new agreement. With Rogers… not necessarily with you.

Pictured here are the LG Shine TU720 in pink, the Sony Ericsson W580i slider in pink, and the BlackBerry Curve in red. If you order online, Rogers Wireless will throw in a $50 gift card to Future Shop, a $10 rebate on the activation fee, and free shipping. I’m sure she’ll love the BlackBerry better than the $200 bouquet you had planned.