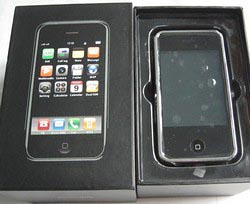 To the untrained eye, the C-002 HiPhone from China might as well be the iPhone, because much attention has gone into the details of this copycat handset. The packaging looks a lot like the real thing — a small black box with a picture of the iPhone on top — and when you open it up, you even get a couple bonuses like a silicon protective cover.

But that similarities don’t die at the packaging level. The C-002 HiPhone looks remarkably like the iPhone with its glossy black appearance and chrome bezel. Upon startup, you even get treated to an Apple logo before getting presented with the undeniably familiar user interface. It’s a touchscreen, naturally, and when you launch into applications like the photo viewer, the multitouch gestures also apply (just not as well).

The C-002 HiPhone can also dynamically switch between landscape and portrait modes, but there does not appear to be a “transition” effect as you would find on the real Apple iPhone. It just switches. Looks like some of the people working at the Apple manufacturing plants are leaking information to their Chinese cousins next door, because this appears to be a pretty solid knockoff.