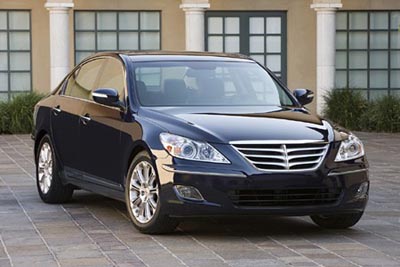 It’s ironic, really, because if Hyundai wants their Genesis luxury sedan to compete well against its German and Japanese counterparts, the biggest selling point would be downplaying its association with Hyundai. Someone in Korea is listening, because they’ve decided that when the Genesis sedan hits dealerships, it will be sans Hyundai badging. At least in the front grille.

Part of the problem with Hyundai is that of image. There is a significant population that still associates Hyundai (and Korea, by extension) with cheaply built cars (think Pony) and a lack of class. The Genesis is supposed to help move Hyundai out of this rut and many people will refuse to buy the car if the stylized H is featured a little too prominently. They like the features, just not the Hyundai-ness of it.

Whether you agree with these Hyundai-haters or not, I think you’d have to agree that the Genesis has a greater air of class and prestige without the Hyundai badge in the grille. Looking at the grilles of BMW, for example, you’ll find that there’s no blue propeller in there. On a side note, Hyundai expects that 20% of buyers will want the 4.6L V8 engine. Power and prestige? Nice.