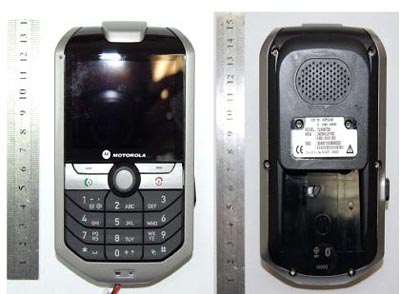 As you may have heard, Motorola is going through some tough times these days, so they should probably rethink some of their design strategies. Truth be known, the Motorola M990 looks absolutely nothing like the existing RAZR line. Heck, I don’t even see any resemblance to a ROKR, RIZR, SLVR, or whatever other all-caps four-letter nameplate that you want to throw into the equation.

Recently overcoming the gauntlet known as the FCC, the Motorola M990 is a candybar-style phone with some incredible sharp edges. I almost see a little Pantech influence, thanks to the sharp corners and relatively compact form factor. One of the most interesting features on the M990, however, is the jog-dial interface. That’s certainly different than what Moto usually does.

There’s also a Smart Key used for a variety of voice commands, including the dialing of a pre-existing contact or even calling someone by saying their phone number. Rounding out the specs are GPS, Bluetooth, and microSD expansion.