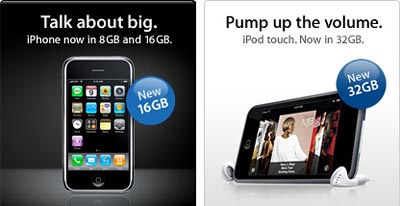 Some people are not satisfied with the current level of storage available on Apple’s touchtastic media player and cell phone. They love the user interface and the form factor, but they find that after stuffing in a video or two, they’re completely out of space. Steve Jobs is coming to the rescue yet once again and he has decided on Super Tuesday to unleash the 16GB iPhone and 32GB iPod Touch onto the world.

The more politically-inclined will be glued to their television sets today as we slowly learn who may come to represent the Democrats and the Republicans in the upcoming Presidential election. With this announcement from Apple, Steve Jobs is stealing a bit of that thunder. The increased storage capacity is pretty much the only difference between these new units and the existing ones (the iPhone and iTouch previously topped out at 8GB and 16GB, respectively).

Both the 16GB Apple iPhone and the 32GB iPod touch receive the suggested retail price of $499. It’s not available right now, but the Jobsian one promises to ship in the next one to three days.