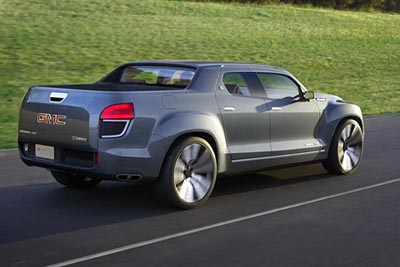 You can’t deny that there is at least some superficial resemblance between the Honda Ridgeline and the newly revealed GMC Denali XT Hybrid Concept. No one at General Motors will acknowledge this outward similarity, of course, pointing instead to all the new technological gizmos that underly the GMC truck.

For starters, the futuristic-looking pickup is a hybrid of a different breed. Whereas most hybrids find some convergence between standard gasoline and electricity, the GMC Denali XT Hybrid combines the efforts of E-85 ethanol with direct-injection technology, resulting in a 2-mode hybrid propulsion system that “can produce the same amount of power generated by a larger engine, while simultaneously using less fuel and therefore producing lower emissions.”

From what I can see, the Denali XT Hybrid looks like a good “urban” vehicle, but it’s not quite as usable as a full “work” truck. Then again, I’m totally not in this kind of market anyways. I’m more of a Tonka guy; I just can’t decide between the crane and the dump truck.

AT&T And GM Coming Together To Give You LTE Cars