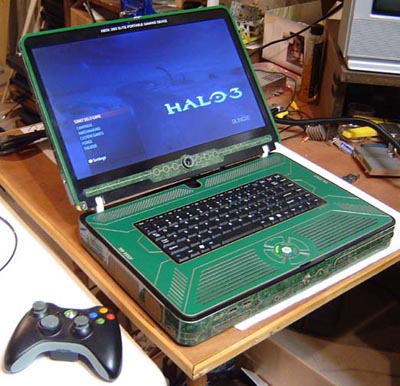 It’s probably not the Xbox Portable that you had in mind, but this is about as close to having a fully functional Microsoft gaming machine that you can take with you on the road. Benjamin Heckendom is better known in most Internet circles simply as Ben Heck, and he’s made a name for himself as some sort of console modding god. His latest creation essentially provides you with a portable Halo 3 entertainment unit.

Ben Heck has managed to hack up the innards of an Xbox 360 Elite and stuff all that gaming goodness into the shell of a somewhat beefy notebook computer. The green color scheme will immediately remind you of a certain Bungie first-person shooter, but of course this portable gamer will also handle any other Xbox 360 title. This isn’t the first Xbox 360 laptop that he’s constructed, but it’s the first with the newer 65nm chipset.

It’s also got the 120GB hard drive from the Xbox 360 Elite, but the biggest attention to detail is the inclusion of a 17-inch display with 1280×720 resolution. This gives you a true 720p experience rather than the 1280×768 resolution you’d get with a regular computer screen.