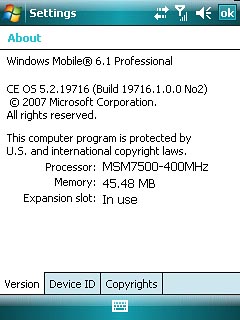 Here’s an extra special bonus for anyone who happens to be rocking the HTC Mogul from Sprint. It turns out that one of the latest ROM updates comes loaded with Windows Mobile 6.1. While this doesn’t appear to be an official release of the new operating system — and it still has a Microsoft copyright date of 2007 — but it does point toward what WinMo 6.1 could bring to the masses.

We should note that this particular release is just a leaked beta version of an upcoming ROM update, so it’s not the kind of thing that anyone at Sprint will officially acknowledge. What it does do is show us some “forward motion” toward an official rollout of Windows Mobile 6.1. There’s no word on when this update will become available for owners of devices other than the Sprint Mogul.

Stay tuned. We hear that the OS is a little faster, has integrated support for SMS threading, and Pocket IE gets a zoom feature.