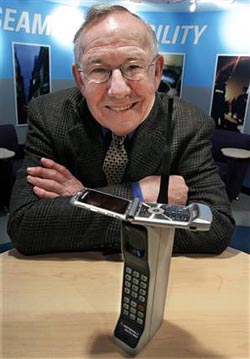 In light of the recent financial reports, Motorola could be looking to spin off its mobile phone business into a separate venture from the rest of what Motorola does. Maybe I’m just a little ignorant, but I always thought that cell phones were what they did. I thought the designing and distribution of RAZRs, ROKRs, and PEBLs was the most critical part of their business. Maybe I was misinformed.

Whatever the case Motorola sent out a news release yesterday saying that they would “examine a corporate restructuring” that would see the mobile device group separate from the rest of the company. This move would be “in the interest of shareholders”, but there’s no saying exactly what the corporate restructuring would entail.

See the guy smiling in the photo? After losing all that money, Motorola might not be smiling anymore. It’s almost like this picture is indicative of Motorola’s situation. The RAZR lying belly up, supported only by the legacy of the company’s ancient Zack Morris heritage.