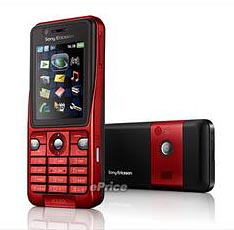 Maybe a red BlackBerry isn’t your kind of thing, but you do appreciate that devilish splash of paint. For the less smartphone-inclined, there is a red hot Sony Ericsson K530i, a candybar that has received a new paintjob just in time for Chinese New Year. Yeah, the red coat isn’t for Valentine’s (that’s what the pink phones are for).

Boasting a “Fiery Red” color scheme, the Sony Ericsson K530i is a 3G handset that has the same functionality as its less red counterparts. That means that if you already own the Warm Silver or Thunder Black editions of this handset, you might as well look elsewhere if you want something new and exciting. Features include a 2MP camera, Access NetFront browser, RSS support, USB, FM, and Bluetooth.

Celebrate Chinese New Year in Taiwan with the Fiery Red Sony Ericsson K530i. Price has been set at about US$273.