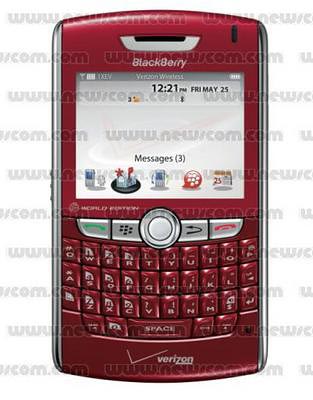 And so color-swapping has once against arrived at Verizon Wireless, because the wireless provider has snatched up a red version of the popular BlackBerry 8830 World Edition smartphone. And just in time for Valentine’s Day too! Nothing quite says”I love you” like a business-minded handheld.

Other than its fiery red appearance, the biggest selling feature on this particular handset is its ability to take on both GSM and CDMA signals, being the first BlackBerry to have this functionality. Naturally, while you’re within Verizon’s service area, you’ll be yakking it up on their CDMA network, but you can just as easily plunk in a SIM card for when you need GSM service overseas. You won’t be getting any AT&T or T-Mobile action here though, because it lacks GSM 850/1900.

The red BlackBerry 8830 World Edition launched today and can be purchased for $299 after a $100 rebate and a two-year service agreement.