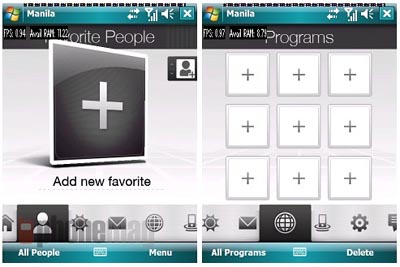 The user interface on a Windows Mobile smartphone is known to elicit some moans and groans from certain people, and that’s why these same people applauded the efforts of the HTC when the Taiwanese company created the TouchFLO skin for their HTC Touch. It made Windows Mobile look so much better and, arguably, more intuitive to use. Who can deny the pleasure of flicking that cube around?

Turns out that HTC is already hard at work on TouchFLO 2.0 and by all indications, it will be even more intuitive than its predecessor and it could offer a “much richer user experience” compared to the standard Windows Mobile dashboard. As you can quite plainly see, these leaked screenshot feature a set of quick-access soft keys on the bottom, not unlike that found on the iPhone. The difference is that these soft buttons can apparently scroll on command.

Of course, the legitimacy of these screenshots have to questioned, because we have no way of telling whether they’re the real deal or just some PhotoShopper’s wet dream. If it is for real, I could be in love. On a side note, the codename for TouchcFLO 2.0 is Manila. A reference to the MacBook Air’s carrying case, perhaps?